During my preschool days I went through a phase where I would pretend to be a princess. In my best English accent I made morning announcements like, “Father, I am ready to get out of bed.” My dad, being pretty awesome, played along by carrying me out of my room because it was too strenuous for a princess to walk herself to breakfast.

Which is a long way of saying I was really into fairy tales.

In 1925 and 1926, the Newbery committee honored two collections of fairy-tale type stories. First Tales From Silver Lands by Charles J. Finger, with stories from Central and South America, then Shen of the Sea by Arthur Bowie Chrisman, with those from China. Given the similarities and back-to-back reading of these works, I grouped them together in one review.

Despite their award-winning status, it is little surprise these tales have not joined the well-known bedtime stories told and retold in American culture. With the exception of one tale, both sets have an overall lack of memorability and relatable themes and characters. (Though perhaps, like my childhood favorites, all they need for a popularity spike is to be retold and packaged by Disney.) 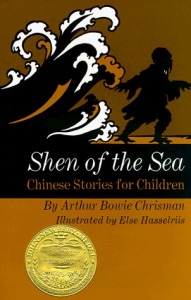 Of the two books, I preferred Tales From Silver Lands, which contained my favorite story between them, “The Bad Wishers.” Being careful for what one wishes for is a theme common to these kinds of tales. “The Bad Wishers” takes the old adage and shows how it might play out as the characters get what they wish, but at a price. Spoiler alert: What gets them out of trouble is learning to be content rather than wishing for different circumstances. A relatable lesson which makes for a more memorable story.

Tales from Silver Lands also has a more engaging structure, with a flow between each story creating the feeling of journeying with the author and hearing the stories along with him. Other than my appreciation of an occasional humorous line, Shen of the Sea lacked that sense of connectivity and impactful content. All that combined gives Tales From Silver Lands the edge in ranking, though neither will replace my fondness for the stories that inspired my childhood theatrics.

Three hasty wishes out of five for Tales from Silver Lands and two for Shen of the Sea.

This post is part of a series about my goal to read through the Newbery Medal books.